The Future is Blockchain: Untraceable brings back the Blockchain Futurist Conference 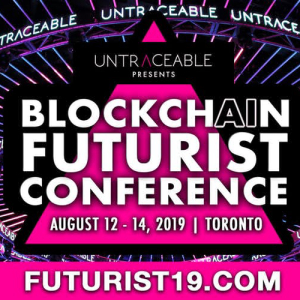 Toronto, ON – Blockchain evangelist, Tracy Leparulo of Untraceable, brings back the largest and most talked about Blockchain Futurist Conference in Canada for its second year on August 12 to 14, 2019, Toronto, Canada. It will be held at Rebel Entertainment Complex at 11 Polson Street, Toronto, Ontario. Last year’s conference was attended by over 2,300 attendees from around the world discussing the future of technology including blockchain, artificial intelligence and other emerging disruptive technologies. It featured leading executives, entrepreneurs, government officials and prominent blockchain vanguards. Speakers included: Larry King (GEAR Blockchain), Charles Hoskinson (former CEO of Ethereum), Anthony

Get Crypto Newsletter
Market Cap
24h Vol
60.32%
Bitcoin Share
16
Today News
Read the Disclaimer : All content provided herein our website, hyperlinked sites, associated applications, forums, blogs, social media accounts and other platforms (“Site”) is for your general information only, procured from third party sources. We make no warranties of any kind in relation to our content, including but not limited to accuracy and updatedness. No part of the content that we provide constitutes financial advice, legal advice or any other form of advice meant for your specific reliance for any purpose. Any use or reliance on our content is solely at your own risk and discretion. You should conduct your own research, review, analyse and verify our content before relying on them. Trading is a highly risky activity that can lead to major losses, please therefore consult your financial advisor before making any decision. No content on our Site is meant to be a solicitation or offer